You have probably seen some version of this curve at some time or another: 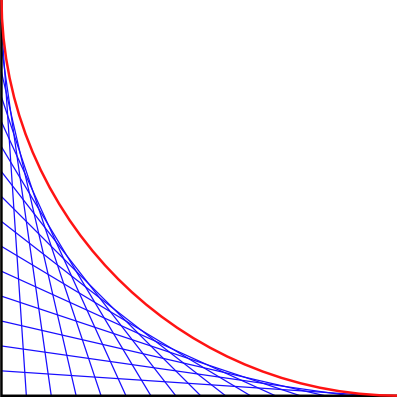 The blue lines are drawn by putting

evenly spaced points in the interval

for both the horizontal and vertical axis and connecting them.

approaches infinity, the question is, what is the area occupied by the blue lines? The area is clearly finite since the entire shape is bounded by a 1×1 square, but how much of that square is occupied?

Intuitively it might seem that the blue curve is a circle, however that intuition is wrong. In the above diagram, the red curve is the actual circle, and clearly the blue curve is outside the circle. But fortunately the area can be found with some calculus.

If we choose some point

on the x-axis, then obviously that point is connected to point

on the y-axis. The slope of this line is

and the equation of this line is

. More conveniently, we can this expression as

, intuitively the line formed when we choose

as our x-axis point.

be the bounding curve for the blue lines. To find

, we want to choose the value

is maximized. To do this, we take the partial derivative

The optimal value of

is the one for which