It is often said that all pop music “sound the same”. If this is the case, then a computer program should be able to compose pop music, right?

This is the problem we studied for the AI final project (CS486) — kind of. We restrict to the simpler problem of harmonizing an existing melody: in other words, given a fixed melody, find a sequence of chord progressions that match it.

We formulated the task as a probabilistic optimization problem, and devised an algorithm to solve it using Hidden Markov Models (HMMs). Then, we used the Music21 library to generate MIDI files from the output so that we can listen to it.

In the experiment, we chose the melody from If Only by JJ Lin. Here’s a demo:

In our model, pop music consists of two parts: a melody line consisting of a sequence of individual notes, and a harmony line of a sequence of chords. Generally, the melody line is the notes sung by the lead vocalist, and the harmony line is played by accompanying instruments (piano, guitar, digital synthesizers). Conventionally, the chord progression is written as a sequence of chord names above the melody; the exact notes in a chord progression is up to the performer’s discretion.

Above: Example of two-part song with melody and chord progression

It is hard to quantify exactly what make a chord progression “good”, since music is inherently subjective and depends on an individual’s musical tastes. However, we capture the notion of “pleasant” using music theory, by assigning a penalty to musical dissonance between a note in the melody and a note in the chord.

According to music theory, the minor second, major second, and tritone (augmented fourth) intervals are dissonant (including the minor and major seventh inversions). Therefore, our program tries to avoid forming these intervals by assigning a penalty.

Above: List of dissonant intervals. All other intervals are consonant.

This is a vastly simplified model that does not capture more nuanced chords that appear in pop music. However, even the four-chord progression G – D – Em – C is sufficient for many top-40 pop songs.

The first thing we tried was to looking at each bar by itself, and searching through all of the permissible chords to find the chord that harmonizes best with the bar.

In other words, we define the penalty of the chord for a melody bar is the number of times a melody note forms a dissonant interval with a chord note, weighted by the duration of the note. Then, we assign to each bar the chord with the lowest penalty.

Here’s what we get:

Above: Naive harmonization. Notice that the Am chord is repeated 3 times.

This assigns a reasonable-sounding chord for each bar on its own, but doesn’t account for the transition probabilities between chords. We end up with the A minor chord repeated 3 times consecutively, which we’d like to avoid.

How to account for chord transitions, while still harmonizing with the melody in each bar? This is where we bring in Hidden Markov Models.

Hidden Markov Models are a type of probabilistic graphical model that assumes that there is an unobservable hidden state that influences the output variable. In each timestep, the hidden state transitions to a different state, with probabilities given by a transition matrix. 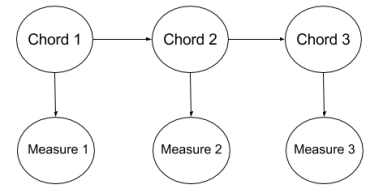 To encode the rule that we don’t like having the same chord consecutively for multiple bars, we assign the transitions so that the probability of transition from any chord to itself is low. The transition probability to every other chord is equal. 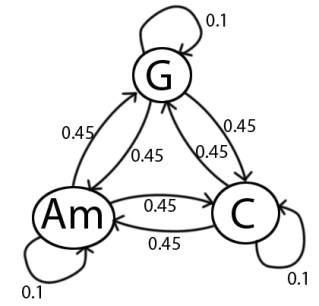 The only thing left to do is solve the most likely sequence problem. We used a modified version of the Viterbi algorithm to do this — it solves the problem quickly using dynamic programming.

Running the Viterbi algorithm on our test melody:

And there we go — no more repeated chords! It doesn’t produce the same chord sequence as my manual harmonization, but sounds quite natural (and doesn’t violate any musical constraints).

Using HMMs, we were able to harmonize a short melody segment. By looking at the entire melody as a whole, the HMM algorithm is able to produce a better chord progression than by optimizing every bar locally. Our implementation uses a greatly simplified musical model: it assumes the melody is in G major, and only considers 6 basic major and minor chords, but it successfully demonstrates a proof of concept.

When implementing this project, we thought this was new research (existing literature on harmonization focused mostly on classical music, not pop music). Alas, after some more literature review, it turns out that a Microsoft research team developed the same idea of using HMMs for melody harmonization, and published a series of papers in 2008. Oh well. Not quite publishable research but still a cool undergraduate class project.

The source code for this project is available on Github. Thanks to Michael Tu for collaborating with me!

If you enjoyed this post, check out my previous work on algorithmic counterpoint!