In case you’re not, the idea is that you’re given some rational function with an awful denominator that you want to integrate, like:

And you break it up into smaller, simpler fractions:

Since the textbooks generously cover this for us, we’ll assume that we know what to do with a rational polynomial with some polynomial as the numerator, and some number of linear or quadratic factors in the denominator. We can do partial fraction decomposition on this. If we like, we could integrate it too. I’m talking about anything of this form:

Although we won’t prove this, this seems fairly believable. We’ll assume that once we get a fraction into this form, we’re done and we can let existing partial fraction methods take care of the rest.

What if we have a polynomial greater than a quadratic in the denominator? So let’s say:

Fortunately, here the denominator can be factored, giving us a form we can deal with:

But we were lucky that time. After all, not all polynomials can be factored, right? What if we have this:

We can’t factor this. What can we do?

It turns out that this isn’t a huge problem. We never required the coefficients of the factors to be integers! Although the factorization is awkward, it can still be factored:

Other than making the next step somewhat algebraically tedious, this decomposition is perfectly valid. The coefficients need not be integers, or even be expressed with radicals. As long as every coefficient is real, partial fraction decomposition will work fine.

The logical next question would be, can all radical functions be written in the previous partial fraction decomposition-suitable form? Looking through my calculus textbooks, none seemed to provide a proof of this — and failing to find a proof on the internet, I’ll give the proof here.

We need to prove that any polynomial that might appear in the denominator of a rational function, say

, can be broken down into linear or quadratic factors with real coefficients.

In order to prove this, we’ll need the following two theorems:

Starting with the denominator polynomial

, we break it down using the Fundamental Theorem of Algebra into complex factors. Of these factors, some will be real, while others will be complex.

Consider the complex factors of

— we always end up with a quadratic with real coefficients. (you can check this for yourself if you want)

At least in theory — partial fraction decomposition always works. The problem is just that we relied on the Fundamental Theorem of Algebra to hand us the roots of our polynomial. Often, these roots aren’t simple integers or radicals — often they can’t really be expressed exactly at all. So we should say — partial fraction decomposition always works, if you’re fine with having infinitely long decimals in the decomposed product.

If you were asked to find the sum of the first four cubes, you would easily be able to do so:

But here you may notice something interesting:

— an identity. This identity can be written also as:

A second way of expressing the same identity simplifies the right side and expresses it as a combination:

A proof by bijection

This identity can be proven combinatorially by noticing that

is the number of ways to choose 2 elements with repetition from the set {1..n} — the following is a proof by Benjamin and Orrison.

In this proof, we prove the third form of the identity

by constructing one set of size

and constructing another set of size

, then constructing a bijection between the two sets.

be the set of ordered 4-pairs

— that is, the fourth integer of the pair is greater or equal to each of the other three. If we fix

, the number of possibilities for the variables

ranges from 1 to n, the total number of elements in

is the number of ways to choose 2 elements with repetition from the set {1..n}, there are

be the set of pairs of such pairs

. The number of elements in

We further partition the sets as follows: let

. We can construct a bijection between

The following is trivially a bijection from

The equivalent bijection from

We can confirm that the two operations we defined are indeed bijections. This proves the identity.

An alternative, algebraic formulation of the hockey stick theorem is follows:

But this works in two ways, considering the symmetry of Pascal’s triangle. The flipped version would be:

Using Pascal’s identity, it is fairly trivial to prove either identity by induction. Instead I present an intuitive, animated version of the proof:

What’s a bit less well known is that in any base b, the same trick applies for b-1 and all of its divisors.

Suppose we were to confirm that

. Adding up the digits:

, so is the original number.

Let n be an integer, b be the base, and m be the number of digits in n. Then we can represent n:

We can rearrange this:

Each of the expressions

. I’ve explored the proof for this in an earlier blog post.

Thus the entire first group of the above expression is divisible by b-1. What remains is the second group, which happens to be the sum of digits in n.

One of the most basic inequalities, the AM-GM inequality states that the AM (Arithmetic mean) of a series of real numbers is always greater or equal to the GM (Geometric mean).

If there are two elements in the series, the AM-GM states this:

The proof for this simplified case is quite simple:

Now, however, it is not so obvious how to extend this proof to a set of three elements, or more. But there is a way, by induction, to prove this inequality for cases where the number of elements is a power of two.

, or when the number of elements in the set is 2.

The method of inductive proof is proving a base case,

, and proving that if this base case is true then the case where

is also true. This would mean that the statement is true for all instances of

Here the base case is

, which we have just proved to be true. We can now prove that this is true when

, or when there are 4 elements in the set:

The arithmetic mean, or AM of the set is

We can split this set into two halves. One contains

, and the other contains

Notice that both of the two halves are of length 2, or in the general case,

. Having already proved the previous case, we can say,

This itself is another arithmetic mean. Applying the base case again:

which was what we wanted to prove.

The process for proving this for a higher power of 2, such as 8, 16, etc, is very similar to what we have just done.

If the number of elements in the set is not a nice and even power of two, the above proof does not work. Instead, we use induction again, but this time from top-down.

If the arithmetic mean of a set,

This lemma simply states that if you have the mean of a set, adding the mean to the set itself and finding the mean again would result in the same mean.

Let a be the arithmetic mean of the set. Then

as we proved before. According to the lemma, we can substitute: 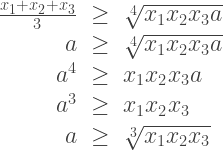 This completes our proof.

Of course I’ve proved it only for n=3, but the same method can be used to prove for any number where it is true for n+1.

To prove this for any integer n, first prove by induction that this is true for some number

. Then prove by induction, again, that it is true for

This method of proof is called forward-backward induction. This proof was discovered by Augustin-Louis Cauchy.

The Pythagorean theorem, stating that the square of the hypotenuse is equal to the sum of the squares of the sides in a right triangle, is a fundamental concept in geometry and trigonometry.

There are many, many ways to prove the Pythagorean theorem. This page contains 84 different proofs, and The Pythagorean Proposition by Loomis contains another 367 proofs.

This is what I think to be an interesting proof, by the use of two circles. It is number 89 in Loomis’s book.

Starting with a right triangle, we draw two circles:

is right, and A and B are the centers of circles

Now we draw some additional lines, extending AB to F and G:

In this diagram, we can prove that

In a similar way, we can prove that

The rest of the proof is algebraic rather than geometric. Let’s call the side AC to be b, BC=a, and AB=c.

From the similar triangles, we have the following ratios:

Adding the two equations, we get:

The line BF can be split into AF and AB which is equal to c+b since AF = AC.

The line EB can be considered the difference between AB and AE, which is equal to c-b.

is a polynomial function, then the remainder of

Say we wanted to find the remainder of

The other way to find the remainder would be by polynomial long division:

This calculation is somewhat wasted if we only want to calculate the remainder, as it takes considerably more work than evaluating a polynomial.

Notice however that if the goal was to obtain the remainder, Synthetic division would be the better method.

To calculate the remainder of a

degree polynomial requires n multiplications and n-1 additions, for both the remainder theorem and synthetic division.

In addition, division gives both the quotient and the remainder while evaluating the polynomial gives only the remainder.

Proof of the Remainder Theorem

Consider that a polynomial

after division results in

where D is the divisor, Q is the quotient, and R is the remainder.

In this case, the polynomial is divided by

where k is a constant. This is the divisor, so

Substituting the divisor into the polynomial, we have:

From here, you can easily see that

Q.E.D. (not sure if this is correct usage or not)

No idea why my writing tends to slide downwards to the right. I don’t have this problem on paper, only when drawing stuff with the mouse on MS-paint.

Anyways, we start with the polynomial

. The variable y is still a variable, but takes the position of k in the remainder theorem.

, we get 0. Therefore the remainder of

is a factor of

Again with the similar polynomial

The expression x+y is divisible only when

However if n is odd:

Therefore, it’s only when n is odd that