Being the last Project Euler problem before the summer break, Problem 299 is quite an interesting problem. Solving it involves both geometry and number theory.

are represented on a coordinate plane as

respectively, all of which have integer coordinates.

is a point on

with integer coordinates such that triangles

It can be shown that in order for the triangles to be similar,

exist such that point

Before we can start coding, there is some geometry work to be done.

It is given that it must be necessary for

. Why is this? Suppose that

. It is obvious that triangles

cannot be similar if

is a right angle and

is isosceles, it follows that

Working backwards, we know that triangles

are all similar, Then

are angular bisectors of

is the incenter of

So the distance from

to the three sides

are equal. This also means

can be represented as

We should note at this point that there is an additional case, where

are parallel. However, in this case

is no longer the incenter.

We shall consider the two as separate cases, and refer to them as the incenter and parallel case respectively.

We first consider the incenter case. Note that in this case,

is uniquely determined by

, there is only one possible

passing through the incenter.

We need to find pairs of

such that there exists a point

where the distance from the point

can be expressed by the equation

or in standard form,

By substitution, we have

It is necessary and sufficient for

to be a perfect square, as then

will be uniquely determined and will be an integer.

Thus the incenter case reduces to finding all pairs

Now we consider the case when

Notice that here there are actually two possible places for

. We can ignore this fact for now.

be a point (not shown) such that

As a consequence of the parallelism of

must be equal. Since

is a right angle, it follows that the coordinates of

and has a radius of

, thus its equation is

has an equation of

By substitution into the circle equation:

Applying the quadratic formula and dividing by 2 gives

Here it is sufficient for

to be a perfect square, as then

will be an integer.

We prove this by using a parity argument: if

is odd as well, and the expression inside the radical is odd; Supposing that it is a perfect square, the square root of that is odd, and when added to

, makes an even number. A similar argument applies if

be the perfect square, we get

Essentially the problem reduces down to finding integral solutions to the above equation, with the limit set to

We are now ready to write a program to enumerate integer pairs to satisfy our equations.

We will start with the incenter case, which is somewhat more basic and easier to deal with.

Recall that we have derived this equation (replacing the variables with

with the limit being on the sum of

are coprime integers with an odd sum, and with

, then the primitive pythagorean triples can be parameterized by the formulas:

Just by using this formula and little else, primitive pythagorean triples triples can be enumerated very quickly.

It is not very difficult to enumerate the non-primitive triples, either. Suppose we have generated the triple

. To count the number of similar triples with

A nearly identical approach can be used to enumerate pairs for the parallel case. Here we have

which is nearly identical to the previous equation and can be parameterized as:

This case is slightly different from the previous case, in the sense that we no longer require

to be positive, so we do not need the restriction that

. Additionally, we need to divide by

as we did before.

This is easy to implement in Java:

This code generates the correct answer in about 25 seconds on my machine.

The two hundred and eighteenth problem of Project Euler is quite interesting, but different. It resembles more closely a mathematics olympiad problem than a programming challenge. Its answer is somewhat surprising, too.

The problem can be stated as follows:

A right triangle is considered perfect if (1): it is primitive (GCD of the three sides is 1) and (2): its hypotenuse is a perfect square.

A perfect triangle is considered superperfect if its area is divisible by the perfect numbers 6 and 28.

How many perfect triangles are there with hypotenuse below

that are not also superperfect?

Looking on the forums, it seems that a large group of solvers counted the triangles for a smaller limit, like

, and getting 0, assumed the answer applied for

In this article I will attempt to prove, mathematically, that it is indeed impossible for a perfect triangle not to be superperfect.

Let’s rephrase this problem a bit: Prove that if a primitive right triangle has a hypotenuse that is a perfect square then its area must be a multiple of 6 and 28.

. If we let p, q, and c be the sides of the right triangle (with c as the hypotenuse), then the area is

. As c is a perfect square, we write c as

, it also follows that

. This is what we shall now prove.

From the Euclid theorem of Pythagorean triples, the sides of a primitive right triangle with sides a, b, and c can be represented as:

and u and v are of opposite parity.

Thus by applying the theorem to our triple:

Notice here that the third equation here itself represents a pythagorean triple. We then apply the same formula again, this time using m and n for the integers: 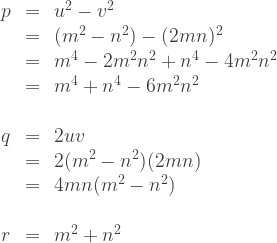 The proof is almost trivial. In order for the triple to primitive, m and n must be of opposite parity, meaning mn is even.

and 4 is already a factor of the expression, it follows that

Rewrite the expression as

The only other scenario is when

or vice versa. Either way,

We construct a table. The first column of this table is

while the second column is

. Then, not counting reflective cases, there are three cases we need to consider:

One of these (or their reflection) apply for whatever value of m and n.

Without loss of generality, rewrite the expression as a congruence mod 7, in terms of m. Since