What is the angle between two planes of a tetrahedron?

The angle between any two edges of the tetrahedron is

, so it’s easy to (falsely) conclude that the angle between two faces must also be

But this isn’t the case: the plane angle is defined as the angle between two lines on the two planes that are both perpendicular to the edge. None of the edges in a tetrahedron is perpendicular to any other, so the answer of

We can try to compute the angle using regular Euclidean solid geometry, but things tend to get messy. A different way to approach the problem is by using vector geometry: using vector methods we can easily calculate the plane angle of the tetrahedron (as well as the icosahedron and the dodecahedron).

Assume symmetry. We represent three concurrent edges of the polyhedron as three vectors beginning at the same point:

be the angles between the vectors (by symmetry we’re assuming that the two alpha’s are equal): 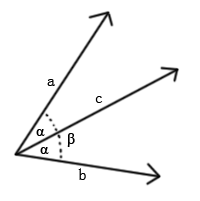 (in case my poor drawing skills does not make this apparent, vectors a and b form one face of the polyhedron and c and b form another face)

For simplicity, let’s also say the lengths of each of the three vectors is 1.

We want to compute the angle between the plane formed by

, and the plane formed by

be the perpendiculars to

respectively each ending at the same point as their respective vectors:

For any two vectors, the dot product is defined

being the angle between the vectors. Given that the lengths of the vectors are all 1, we have:

We want to find the angle between

The dot product of vectors x and y is simply:

. Hence the cosine of the angle is:

We can now use this newly derived formula to calculate plane angles! For example…

In the tetrahedron, both 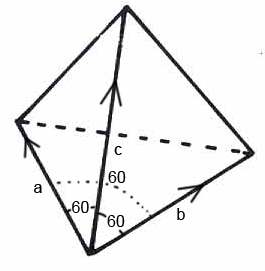 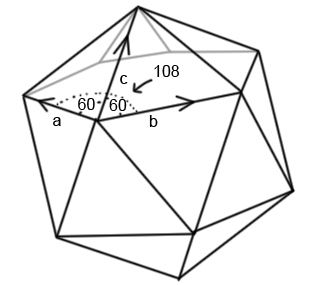 The top ‘cap’ is a regular pentagon, which has a vertex angle of 108; each side of the pentagon constitutes a side of an equilateral triangle. Since

Computing angles for the dodecahedron works a bit differently from the tetrahedron and icosahedron. Instead of using existing edges as vectors, we construct an equilateral triangle by connecting three vertices: 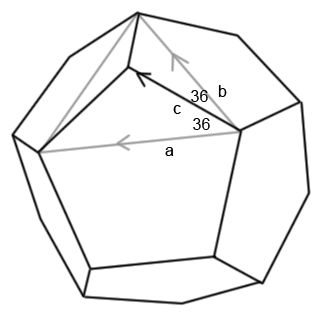 (since it’s part of a regular pentagon) and