The following work is my math essay assignment (an essay on any topic related to the Math 30 curriculum). I found it interesting enough that I’ll post it here on my math blog. Yay.

How do you make a world map? We find world maps everywhere — but the making of world maps is more complicated than most people realize. The earth is round, and a map is flat. How should one represent the surface of the earth, a sphere, on a flat sheet of paper?

There are many types of map projections, but one of the most common types is the cylindrical projection. Imagine a semi-transparent, hollow globe with a light inside of it. Now wrap a piece of blank map paper around it, like a cylinder: 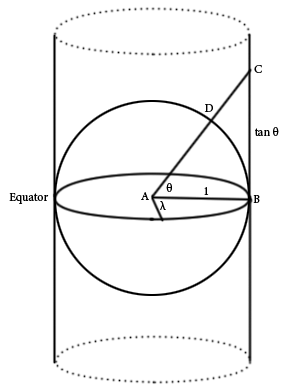 Let the earth be represented as a unit sphere. The longitude (east-west location) shall be denoted as

, and the latitude (north-south location) as

is the center of the earth, and

a point on the equator.

Now a light source is placed at point

on the cylinder such that points

are collinear. Using some trigonometry, we have

After repeating this procedure for every point on the sphere, the cylinder is unrolled into a flat sheet. The result is the following map: 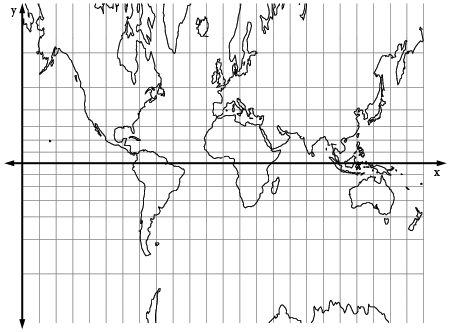 Here, if a point on the earth is known (we know its latitude and longitude), we know its position on the map. The position coordinates of the map,

in the following equations:

This projection has several major drawbacks: most notably, as the latitude

becomes increasingly steep, and the

-coordinates of the point of the map increases towards infinity. At high latitudes, the map is very distorted.

The map is not equal-area — in an equal-area map, shapes of equal area on the sphere have equal area on the projection. Looking at the map we created, this is clearly not the case. Neither is the map conformal, or shape preserving. In a conformal map, the angle between any two lines must be the same as their counterparts on the map. 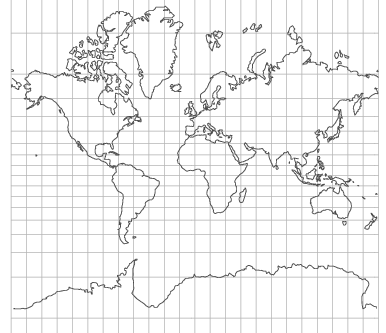 This is a strange and seemingly random formula. But when we use this formula, we get a conformal map. How does this work?

Before deriving the formula for Mercator’s Projection, we take a step back and ask ourselves — what was the projection for in the first place?

Unlike most maps today which are used to decorate walls, Mercator’s map was more than that — it was used for nautical navigation. Suppose you were to travel by ship from Vancouver to Honolulu, equipped with nothing more than a compass. Which direction should you travel? 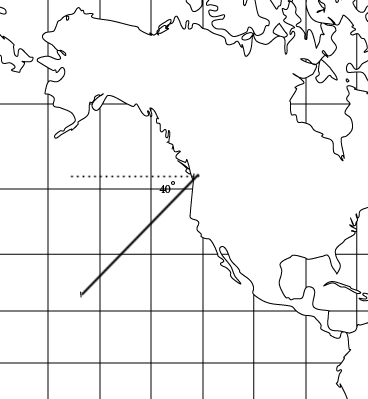 Now if you have a copy of Mercator’s map, this becomes simple. You draw a straight line from Vancouver to Honolulu, and with a protractor you find that the direction is

south to the parallel. With a compass, it would be easy for you to maintain this constant heading for the entire duration of the trip.

(Footnote — The straight line on Mercator’s map is not straight on the Earth — it is actually a curved line, called a rhumb line. That is, after taking an initial bearing, one proceeds along the same bearing (relative to the north pole) for the duration of the trip. In the example, you would have to adjust your heading intermittently so that you are always heading at the direction

south to the parallel.)

This technique is possible because it relies on one crucial property of Mercator’s map: that it is conformal. It would fail if we tried the same technique on the cylindrical projection given in the introduction.

However, notice that on Mercator’s map, all parallels have the same length: a parallel is simply a line across the width of the entire map. But on Earth, a sphere, parallels are longer when they are closer to the equator and shorter when near the poles: 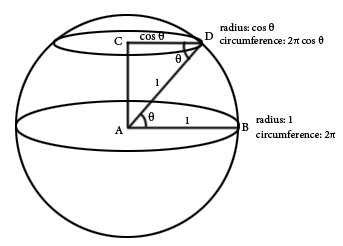 Let the Earth be a unit sphere with center

is a point on the surface of the Earth and

is its corresponding point on the equator. Let

, the circumference of the Earth at the equator is

. But the circumference at latitude

It is easy to see why: as

in the diagram, it follows that angles

On the map, the length of the equator and the parallel at latitude

are equal. But on Earth, the parallel at latitude

is smaller than the equator by a factor of

; in the projection any line at latitude

ends up being stretched horizontally by a factor of

Finally, in order to satisfy the property of conformality, any part of the map stretched horizontally by some factor, say

, must be stretched vertically by the same factor

. Doing so preserves the angles of that part of the map:

Imagine a very small piece of land at latitude

. When it is represented on the map, it is stretched horizontally by

. Hence to preserve conformity, it must also be stretched vertically by

. Similarly, the space this piece of land occupies on the map is not just

approaches 0, the ratio of

and integrating both sides gives:

, it turns out that the numerator is the derivative of

. Thus we can substitute

We defined the map so that the equator lies on the x-axis, therefore when

. Substituting and solving for

, we can remove the absolute value brackets. Therefore,

This is what is desired.

Mercator’s Projection is merely a conformal map, not a perfect map. It has several drawbacks — the scale varies greatly from place to place: as the latitude increases, the map gets stretched more and more. This severely distorts larger figures, especially areas near the poles. At a latitude greater than about

, the map is practically unusable.

The Gall-Peters Projection is an alternative cylindrical projection: 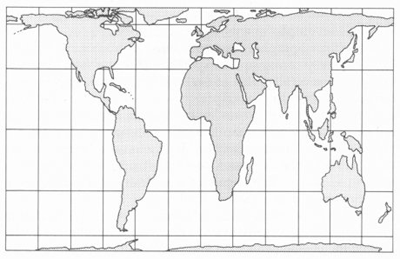 When a map is used in navigation, it is important that angles are preserved in the map. But when a map is used to present statistical data, it’s often more important to preserve areas in the map: otherwise one may be deceived into thinking one country is bigger than another when they are actually the same size.

The Gall-Peters projection does this, trading conformity for equal-area — two countries of the same area will have the same area on the map, no matter where they are on the map. This map projection is produced by the following equations:

A discussion on why this set of equations produces an equal-area map is beyond the scope of this essay.

It is a tricky matter to accurately depict the surface of the earth on a flat sheet of paper. The method of cylindrical projection produces several considerably different maps.

Each of these map projections are both similar and very different. They are similar in that they are all produced in some way by wrapping a cylinder around a spherical Earth. But the mathematics needed to produce them differ.