Receiver Operating Characteristic (ROC) curves and AUC values are often used to score binary classification models in Kaggle and in papers. However, for a long time I found them fairly unintuitive and confusing. In this blog post, I will explain some basic properties of ROC curves that are useful to know for Kaggle competitions, and how you should interpret them. 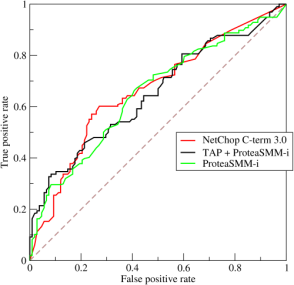 Above: Example of a ROC curve

A perfect classifier has a 100% true positive rate and 0% false positive rate, so its ROC curve passes through the upper left corner of the square. A completely random classifier (ie: predicting “true” with probability p and “false” with probability 1-p for all inputs) will by random chance correctly classify proportion p of the actual true values and incorrectly classify proportion p of the false values, so its true and false positive rates are both p. Therefore, a completely random classifier’s ROC curve is a straight line through the diagonal of the plot.

The AUC (Area Under Curve) is the area enclosed by the ROC curve. A perfect classifier has AUC = 1 and a completely random classifier has AUC = 0.5. Usually, your model will score somewhere in between. The range of possible AUC values is [0, 1]. However, if your AUC is below 0.5, that means you can invert all the outputs of your classifier and get a better score, so you did something wrong.

Why do we care about AUC, why not just score by percentage accuracy?

AUC is good for classification problems with a class imbalance. Suppose the task is to detect dementia from speech, and 99% of people don’t have dementia and only 1% do. Then you can submit a classifier that always outputs “no dementia”, and that would achieve 99% accuracy. It would seem like your 99% accurate classifier is pretty good, when in fact it is completely useless. Using AUC scoring, your classifier would score 0.5.

In many classification problems, the cost of a false positive is different from the cost of a false negative. For example, it is worse to falsely imprison an innocent person than to let a guilty criminal get away, which is why our justice system assumes you’re innocent until proven guilty, and not the other way around. In a classification system, we would use a threshold rule, where everything above a certain probability is treated as 1, and everything below is treated as 0. However, deciding on where to draw the line requires weighing the cost of a false positive versus a false negative — this depends on external factors and has nothing to do with the classification problem.

AUC scoring lets us evaluate models independently of the threshold. This is why AUC is so popular in Kaggle: it enables competitors to focus on developing a good classifier without worrying about choosing the threshold, and let the organizers choose the threshold later.

(Note: This isn’t quite true — a classifier can sometimes be better at certain thresholds and worse at other thresholds. Sometimes it’s necessary to combine classifiers to get the best one for a particular threshold. Details in the paper linked at the end of this post.)

Next, here’s a mix of useful properties to know when working with ROC curves and AUC scoring.

AUC is not directly comparable to accuracy, precision, recall, or F1-score. If your model is achieving 0.65 AUC, it’s incorrect to interpret that as “65% accurate”. The reason is that AUC exists independently of a threshold and is immune to class imbalance, whereas accuracy / precision / recall / F1-score do require you picking a threshold, so you’re measuring two different things.

Only relative order matters for AUC score. When computing ROC AUC, we predict a probability for each data point, sort the points by predicted probability, and evaluate how close is it from a perfect ordering of the points. Therefore, AUC is invariant under scaling, or any transformation that preserves relative order. For example, predicting [0.03, 0.99, 0.05, 0.06] is the same as predicting [0.15, 0.92, 0.89, 0.91] because the relative ordering for the 4 items is the same in both cases.

A corollary of this is we can’t treat outputs of an AUC-optimized model as the likelihood that it’s true. Some models may be poorly calibrated (eg: its output is always between 0.3 and 0.32) but still achieve a good AUC score because its relative ordering is correct. This is something to look out for when blending together predictions of different models.

That’s my summary of the most important properties to know about ROC curves. There’s more that I haven’t talked about, like how to compute AUC score. If you’d like to learn more, I’d recommend reading “An introduction to ROC analysis” by Tom Fawcett.

For the past few weeks, I’ve been working on the TensorFlow Speech Recognition Challenge on Kaggle. The task is to recognize a one-second audio clip, where the clip contains one of a small number of words, like “yes”, “no”, “stop”, “go”, “left”, and “right”.

In general, speech recognition is a difficult problem, but it’s much easier when the vocabulary is limited to a handful of words. We don’t need to use complicated language models to detect phonemes, and then string the phonemes into words, like Kaldi does for speech recognition. Instead, a convolutional neural network works quite well.

The dataset consists of about 64000 audio files which have already been split into training / validation / testing sets. You are then asked to make predictions on about 150000 audio files for which the labels are unknown.

Actually, this dataset had already been published in academic literature, and people published code to solve the same problem. I started with GCommandPytorch by Yossi Adi, which implements a speech recognition CNN in Pytorch.

The first step that it does is convert the audio file into a spectrogram, which is an image representation of sound. This is easily done using LibRosa. 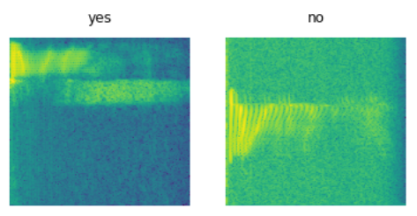 Above: Sample spectrograms of “yes” and “no”

Now we’ve converted the problem to an image classification problem, which is well studied. To an untrained human observer, all the spectrograms may look the same, but neural networks can learn things that humans can’t. Convolutional neural networks work very well for classifying images, for example VGG16:

Above: A Convolutional Neural Network (LeNet). VGG16 is similar, but has even more layers.

For more details about this approach, refer to these papers:

You might ask: if somebody already implemented this, then what’s there left to do other than run their code? Well, the test data contains “silence” samples, which contain background noise but no human speech. It also has words outside the set we care about, which we need to label as “unknown”. The Pytorch CNN produces about 95% validation accuracy by itself, but the accuracy is much lower when we add these two additional requirements.

For silence detection, I first tried the simplest thing I could think of: taking the maximum absolute value of the waveform and decide it’s “silence” if the value is below a threshold. When combined with VGG16, this gets accuracy 0.78 on the leaderboard. This is a crude metric because sufficiently loud noise would be considered speech.

Next, I tried running openSMILE, which I use in my research to extract various acoustic features from audio. It implements an LSTM for voice activity detection: every 0.05 seconds, it outputs a probability that someone is talking. Combining the openSMILE output with the VGG16 prediction gave a score of 0.81.

I tried a bunch of things to improve my score:

In the end, the top scoring model had a score of 0.91, which beat my model by 4 percentage points. Although not enough to win a Kaggle medal, my model was in the top 15% of all submissions. Not bad!

My source code for the contest is available here.

This week I participated in the Porto Seguro Kaggle competition. Basically, you’re asked to predict a binary variable — whether or not an insurance claim will be filed — based on a bunch of numerical and categorical variables.

With over 5000 teams entering the competition, it was the largest Kaggle competition ever. I guess this is because it’s a fairly well-understood problem (binary classification) with a reasonably sized dataset, making it accessible to beginning data scientists.

Kaggle is a machine learning competition platform filled with thousands of smart data scientists, machine learning experts, and statistics PhDs, and I am not one of them. Still, I was curious to see how my relatively simple tools would fare against the sophisticated techniques on the leaderboard.

The first thing I tried was logistic regression. All you had to do was load the data into memory, invoke the glm() function in R, and output the predictions. Initially my logistic regression wasn’t working properly and I got a negative score. It took a day or so to figure out how to do logistic regression properly, which got me a score of 0.259 on the public leaderboard.

Next, I tried gradient boosted decision trees, which I had learned about in a stats class but never actually used before. In R, this is simple — I just needed to change the glm() call to gbm() and fit the model again. This improved my score to 0.265. It was near the end of the competition so I stopped here.

At this point, the top submission had a score of 0.291, and 0.288 was enough to get a gold medal. Yet despite being within 10% of the top submission in overall accuracy, I was still in the bottom half of the leaderboard, ranking in the 30th percentile. 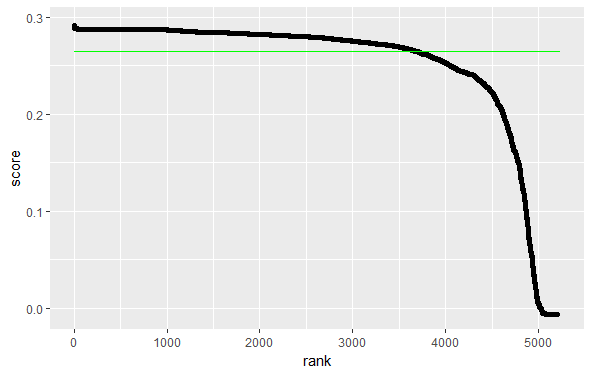 Above: Public leaderboard of the Porto Seguro Kaggle competition two days before the deadline. Line in green is my submission, scoring 0.265.

This graph illustrates the nature of this competition. At first, progress is easy, and pretty much anyone who submitted anything that was not “predict all zeros” got over 0.200. From there, you make steady, incremental progress until about 0.280 or so, but afterwards, any further improvements is limited.

The top of the leaderboard is very crowded, with over 1000 teams having the score of 0.287. Many teams used ensembles of XGBoost and LightGBM models with elaborate feature engineering. In the final battle for the private leaderboard, score differences of less than 0.001 translated to hundreds of places on the leaderboard and spelled the difference between victory and defeat. 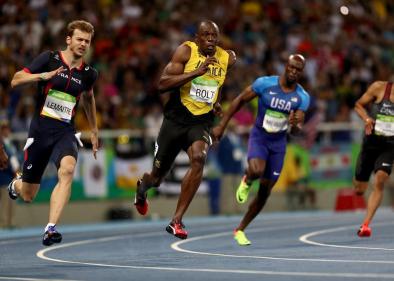 This pattern is common in Kaggle and machine learning — often, a simple model can do quite well, at least the same order of magnitude as a highly optimized solution. It’s quite remarkable that you can get a decent solution with a day or two of work, and then, 5000 smart people working for 2 months can only improve it by 10%. Perhaps this is obvious to someone doing machine learning long enough, but we should look back and consider how rare this is. The same does not apply to most activities. You cannot play piano for two days and become 90% as good as a concert pianist. Likewise, you cannot train for two days and run 90% as fast as Usain Bolt.

Simple models won’t win you Kaggle competitions, but we shouldn’t understate their effectiveness. Not only are they quick to develop, but they are also easier to interpret, and can be trained in a few seconds rather than hours. It’s comforting to see how far you can get with simple solutions — the gap between the best and the rest isn’t so big after all.

Read further discussion of this post on the Kaggle forums!