Some time ago, my bed fell apart, and I entered into a dispute with my landlord. “You broke the bed,” he insisted, “so you will have to pay for a new one.”

Being a poor grad student, I wasn’t about to let him have his way. “No, I didn’t break the bed,” I replied. “The bed broke.” 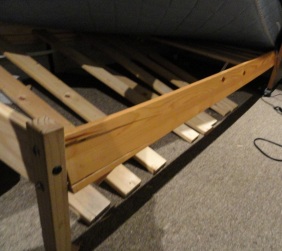 Above: My sad and broken bed. Did it break, or did I break it?

What am I implying here? It’s interesting how this argument relies on a crucial semantic difference between the two sentences:

The difference is that (1) means I caused the bed to break (eg: by jumping on it), whereas (2) means the bed broke by itself (eg: through normal wear and tear).

This is intuitive to a native speaker, but maybe not so obvious why. One might guess from this example that any intransitive verb when used transitively (“X VERBed Y”) always means “X caused Y to VERB“. But this is not the case: consider the following pair of sentences:

Above: Semantic roles for verbs “break” and “attack”.

Sentences which are very similar syntactically can have different structures semantically. To address this, linguists assign semantic roles to the arguments of verbs. There are many semantic roles (and nobody agrees on a precise list of them), but two of the most fundamental ones are Agent and Patient.

The way that a verb’s syntactic arguments (eg: Subject and Object) line up with its semantic arguments (eg: Agent and Patient) is called the verb’s argument structure. Note that an agent is not simply the subject of a verb: for example, in “the bed broke“, the bed is syntactically a subject but is semantically a patient, not an agent.

Computational linguists have created several corpora to make this information accessible to computers. Two of these corpora are VerbNet and FrameNet. Let’s see how a computer would be able to understand “I didn’t break the bed; the bed broke” using these corpora.

Above: Excerpt from VerbNet entry for the verb “break”.

VerbNet is a database of verbs, containing syntactic patterns where the verb can be used. Each entry contains a mapping from syntactic positions to semantic roles, and restrictions on the arguments. The first entry for “break” has the transitive form: “Tony broke the window“.

The word “break” can take arguments in other ways, not just transitive and intransitive. VerbNet lists 10 different patterns for this word, such as “Tony broke the piggy bank open with a hammer“. This sentence contains a result (open), and also an instrument (a hammer). The entry for “break” also groups together a list of words like “fracture”, “rip”, “shatter”, etc, that have similar semantic patterns as “break”.

Above: Excerpt from FrameNet entry for the verb “break”.

FrameNet is a similar database, but based on frame semantics. The idea is that in order to define a concept, you have to define it in terms of other concepts, and it’s hard to avoid a cycle in the definition graph. Instead, it’s sometimes easier to define a whole semantic frame at once, which describes a conceptual situation with many different participants. The frame then defines each participant by what role they play in the situation.

The word “break” is contained in the frame called “render nonfunctional“. In this frame, an agent affects an artifact so that it’s no longer capable of performing its function. The core (semantically obligatory) arguments are the agent and the artifact. There are a bunch of optional non-core arguments, like the manner that the event happened, the reason that the agent broke the artifact, the time and place it happened, and so on. FrameNet tries to make explicit all of the common-sense world knowledge that you need to understand the meaning of an event.

Compared to VerbNet, FrameNet is less concerned with the syntax of verbs: for instance, it does not mention that “break” can be used intransitively. Also, it has more fine-grained categories of semantic roles, and contains a description in English (rather than VerbNet’s predicate logic) of how each semantic argument participates in the frame.

But recently, the NLP community is realizing that deep learning has limitations when it comes to common-sense reasoning, that you can’t solve just by adding more layers on to BERT and feeding it more data. So maybe deep learning systems can benefit from these lexical semantic resources.

Today I’m going to be sharing a paper I’ve been looking at, related to my research: “Linguistic Features Identify Alzheimer’s Disease in Narrative Speech” by Katie Fraser, Jed Meltzer, and my adviser Frank Rudzicz. The paper was published in 2016 in the Journal of Alzheimer’s Disease. It uses NLP to automatically diagnose patients with Alzheimer’s disease, given a sample of their speech.

Alzheimer’s disease is a disease that you might have heard of, but it doesn’t get much attention in the media, unlike cancer and stroke. It is a neurodegenerative disease that mostly affects elderly people. 5 million Americans are living with Alzheimer’s, including 1 in 9 over the age of 65, and 1 in 3 over the age of 85.

Alzheimer’s is also the most expensive disease in America. After diagnosis, patients may continue to live for over 10 years, and during much of this time, they are unable to care for themselves and require a constant caregiver. In 2017, 68% of Medicare and Medicaid’s budget is spent on patients with Alzheimer’s, and this number is expected to increase as the elderly population grows.

Despite a lot of recent advances in our understanding of the disease, there is currently no cure for Alzheimer’s. Since the disease is so prevalent and harmful, research in this direction is highly impactful.

One of the early signs of Alzheimer’s is having difficulty remembering things, including words, leading to a decrease in vocabulary. A reliable way to test for this is a retrieval question like the following (Monsch et al., 1992):

In the next 60 seconds, name as many items as possible that can be found in a supermarket.

A healthy person could rattle out about 20-30 items in a minute, whereas someone with Alzheimer’s could only produce about 10. By setting the threshold at 16 items, they could classify even mild cases of Alzheimer’s with about 92% accuracy.

This doesn’t quite capture the signs of Alzheimer’s disease though. Patients with Alzheimer’s tend to be rambly and incoherent. This can be tested with a picture description task, where the patient is given a picture and asked to describe it with as much detail as possible (Giles, Patterson, Hodges, 1994).

There is no time limit, and the patients talked until they indicated they had nothing more to say, or if they didn’t say anything for 15 seconds.

Patients with Alzheimer’s disease produced descriptions with varying degrees of incoherence. Here’s an example transcript, from the above paper:

Experimenter: Tell me everything you see going on in this picture

You can clearly tell that something’s off, but it’s hard to put a finger on exactly what the problem is. Well, time to apply some machine learning!

Fraser’s 2016 paper uses data from the DementiaBank corpus, consisting of 240 narrative samples from patients with Alzheimer’s, and 233 from a healthy control group. The two groups were matched to have similar age, gender, and education levels. Each participant was asked to describe the Boston Cookie Theft picture above.

Fraser’s analysis used both the original audio data, as well as a detailed computer-readable transcript. She looked at 370 different features covering all sorts of linguistic metrics, like ratios of different parts of speech, syntactic structures, vocabulary richness, and repetition. Then, she performed a factor analysis and identified a set of 35 features that achieves about 81% accuracy in distinguishing between Alzheimer’s patients and controls.

According to the analysis, a few of the most important distinguishing features are:

Shortly after this research was published, my adviser Frank Rudzicz co-founded WinterLight Labs, a company that’s working on turning this proof-of-concept into an actual usable product. It also diagnoses various other cognitive disorders like Primary Progressive Aphasia.

A few other grad students in my research group are working on Talk2Me, which is a large longitudinal study to collect more data from patients with various neurodegenerative disorders. More data is always helpful for future research.

So this is the starting point for my research. Stay tuned for updates!