For many people (for me at least), the Harmonic Conjugate is a difficult concept to understand. I didn’t really get it the first time I saw it, at Mathcamp. Let’s take the definition of the harmonic conjugate:

AB and CD are harmonic conjugates if this equation holds:

If you’re like me, you’re thinking along the lines of “But why? Why is this defined this way? Why would we spend so much time proving things about this weird concept? What’s the point, what’s the use?”

Even now, I can’t really give you an intuitive explanation of why this equality is so important. On the other hand, I could certainly come up with a few problems in which the concept of the harmonic conjugate turns to be useful.

Apollonius’s problem was this: you are in control of a ship (point A on diagram), and you are in pursuit of another ship (point B). The other ship is fleeing in a straight line in some direction:

Your speed is (obviously) faster than the speed of the other ship: say they’re going at 30 km/h and you’re going at 50 km/h. Additionally, your ship is required to go in a straight line.

In which direction should you set off in order to intercept the fleeing ship?

The first step of the solution is to construct harmonic conjugates CD so that their ratio is the ratio of your speed to the other ship’s speed (we’ll prove later that this is actually possible; assume we can do this for now):

Next, draw a circle with diameter CD: 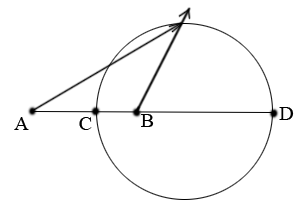 There is a point where the ray from B (their ship) intersects this circle. Now go to this point immediately, in a straight line: the ship will be there.

In order to prove that this works, we’ll need to take a step back and look at how we constructed the points C and D. The solution turns out to be evident directly from the construction of the harmonic conjugates.

Again, let’s assume our desired ratio is 5/3. Starting with the points A and B, the first step is constructing some point P so that:

Next, dropping the internal and external angle bisectors of the new triangle gives the harmonic conjugates C and D:

Combining the two proves that C and D are indeed harmonic conjugates to AB.

As a corollary, notice that because of angle bisecting, the angle CPD is always a right angle — hence, the locus of all points P forms a circle with diameter CD.

Returning to the ship problem, since each point P is defined as a point so that

, it follows that when both ships travel to such a point P, they will meet at the same time.