Anyone who’s played piano, or any other musical instrument, would be familiar with the “standard” musical notation. It’s clear, unambiguous, accepted worldwide, and has been basically unchanged since Bach. It looks like this: 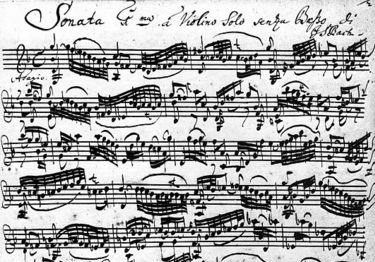 Now there’s a reason this notation has survived this long — it’s good. It’s easy to read, and allows a musician to read and play a piece he’s never heard before.

But when you try to write music, you find that the notation is actually quite cumbersome to write. The notes are positioned on groups of 5 lines, so you’d better either have sheets of these lines printed, or be prepared to tediously draw these lines with a ruler. The timing of notes is very precise, so if you slightly exceed the allowed time for a bar, sorry, your notation is not valid anymore.

To solve these frustrations, I created an alternate system of recording music, with the primary goal of being easy to write. It’s possible to jot down a melody in 30 seconds, with just a pencil and normal (not printed sheet) paper.

I do not claim my notation to be better than the standard notation. Rather, I achieve a different goal, sacrificing information for the ease of writing.

Standard notation is good for recording a song so that a musician can play it without having heard it before.

My notation is good for reminding a musician how to play a song he has heard before.

A common use case would be reminding yourself the notes of a song you’re playing, or accompanying a recording of the song. In a way, its purpose is similar to that of guitar tablature.

Here’s my justification for doing this. Most people can produce rhythm intuitively — that is, after hearing a passage a few times, he can clap back the rhythm. It’s much more difficult to find the correct notes after hearing the passage — I stumble upon it by trial and error.

So if you write down the notes but leave out the rhythm, it would often be enough information to play the song.

The tradeoff should become clear if you compare the same passage written side by side (from Bach’s Minuet in G Major):

Start by writing the notes in a line, and separate bars with a vertical | line. Indicate the key signature at the beginning of the page, if needed. Feel free to liberally clump notes together or space them apart based on rhythm.

Next is the rule for jumps. When the melody goes upwards by a perfect fourth or more (like from C->F), write the jumped note on an elevated line.

Remain on the elevated line as long as the melody is still increasing or stays the same. But as soon as the melody descends, immediately drop back down to the neutral line.

As long as the melody consists of small intervals (like C->E->C), we stay on the neutral line. Only when the jump is large (C->F) do we go to the elevated line.

Typically in music, a large jump in one direction is followed by a small step backwards. This means that we spend most of our time on the neutral line. It’s very rare for a melody to have multiple jumps in the same direction.

You do not always have to start on the neutral line. It might be useful to start on an elevated or depressed line. Here’s an example (Harry Potter):

Reasoning behind the Jump Rule

You might be wondering, why make this jump rule so complicated? Why have a jump rule at all?

Well, we need some way of indicating octaves. Otherwise, a interval like C->F would be ambiguous: are we going up a perfect fourth, or going down a perfect fifth?

On the other hand, if we decreased the jump threshold, say a major third (C->E) is a jump, then the melody would be littered with jumps up and down, which would be a nightmare to handle. Setting the threshold to the perfect fourth is a good balance.

The complexities of the jump rule ensures that when you’re shifting upwards, the melody is actually going upwards. It would be confusing to the reader if there was a situation where we return from the elevated line down to the neutral line, while the melody is going upwards!

Another distinct alternative to the jump rule is to divide all the notes into distinct octaves: for instance, put any notes between C4 (middle C) and C5 on the neutral line, everything between C5 and C6 on the elevated line, and so on. I experimented with this, but found it very awkward when the melody straddles on the boundary between two octaves.

And that’s how the jump rule was created. So please experiment with this system, see if you like it!