Naturally I wonder, how rare are these numbers — numbers that are prime but also a sum of a bunch of consecutive primes? This seems like a problem easily solved with some programming.

Let us write P(n,k) as the number of primes less than or equal to n that can be written as a sum of at least k consecutive primes. How big is P(2011,k) compared to

My method for computing P(n,k) is pretty simple. First we start with a list of prime numbers, then write the cumulative sums for the prime numbers (these images were taken with my laptop camera off a whiteboard):

Next take every pair from the bottom list, and find their differences: 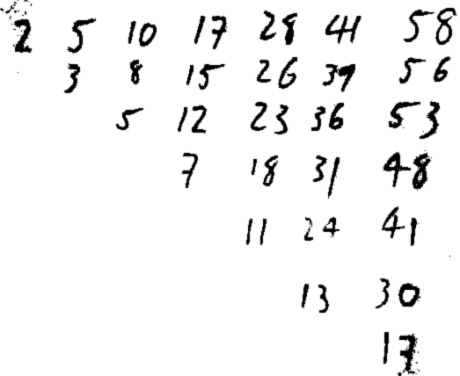