Often, when looking through solutions of difficult olympiad problems, one would wonder, how are you supposed to come up with something like that? The steps are numerous and each one seems to be the work of a wizard…

One book that I like is Solving Mathematical Problems – A Personal Perspective by Terrence Tao. It’s a problem book, but one that’s slightly different from the others. Instead of merely giving a solution to its problems, it gives some insight on the mathematician’s thoughts as he solves the olympiad problem, such that the steps seem reasonable and logical 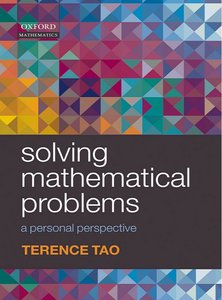 Here I’m going to attempt dissecting a recent contest problem I encountered (from the Tournament of Towns contest a few weeks ago) in the style of Tao.

On a circular track,

cyclists start in the same direction at the same time, all at different but constant speeds. No three cyclists meet at the same time. If two cyclists are at the same position on the track, we say they meet. Prove that by the time every pair of cyclists have met at least once, each cyclist has had at least

The problem seems confusing, with so much seemingly unrelated information. We can always start by drawing a picture: 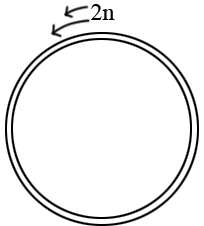 This doesn’t seem to help that much. A circle suggests that the formula for the circumference –

might come into play, but looking at the rest of the problem, this seems unlikely, because the problem (especially the result we try to prove) is combinatorial, not geometric.

. We are also given that all of the velocities are different. Then why not simplify things for ourselves by ordering the cyclists in order of increasing velocity, that is,

? At the same time, we’ll label the cyclists according to their velocities, so we have

What else are we given? The number of cyclists is even, and no three cyclists meet at the same time. As there doesn’t seem to be much we can do to make use of these conditions, we can leave them aside for now.

Now if the length of the track is

, then each cyclist goes around the track every

units of time. The event only really ends when every pair of cyclists have met at least once – when does this happen? If we look at any two cyclists –

being the faster cyclist – the two have a velocity difference of

could be very small. Since we ordered

in increasing velocity, the smallest value for

should be between two adjacent cyclists. If we let

Furthermore, we can now say that the event ends at time

It seems that we are getting somewhere. But we haven’t really touched the point we’re trying to prove, that each cyclist has had

meetings at this point. Let’s look at pairs of adjacent cyclists. If

are adjacent, then we know by definition that they must meet at least once in the time

But what about non-adjacent cyclists? If

are separated by exactly one cyclist,

. Adding the two together gives

, so they meet at least once every

units of time. Equivalently, they meet at least twice in the time

It follows that any pair of cyclists

meet at least every

units of time, so they meet at least

times in the course of the event.

We’re on home stretch here. How can use this new information to show that every cyclist has had

. In the event, he meets at least

So the total number of times he meets is

All we have to do now is simplify:

are consecutive integers and their product must be positive. This concludes the proof.